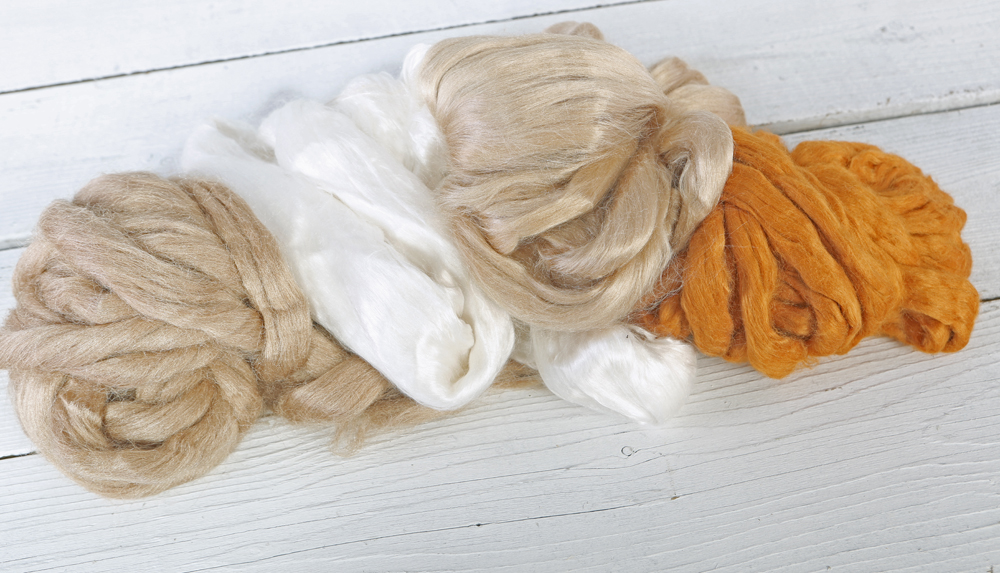 A few posts ago we spoke about silk. More exactly - about silk fabrics for nuno felting. And now it's time we focused on silk fibers.

Silk… The word itself seems to have a soft and smooth touch to it. Silk never plays the solo party in felting, but it can change your project dramatically. The finest fibers can brighten up the design by adding extra sheen and make the article look rich and elegant.

The great thing about natural silk is that it bonds perfectly with wool but doesn't shrink. The result is a beautiful wavy pattern on the surface of the felt.

Here is your brief guide on the types of silks for luxury felt items.

Silk fibres come in three grades. Grade A is of the best possible quality. When the cocoon is ready, you unravel it to get a floss which can be about a mile long. The fibres are soft and smooth to the touch and don't get clumped.

If the cocoon developed in a somewhat wrong way before it got unraveled, the flosses are short and clumps form in its fibres. This does affect the quality - such silk feels rougher and looks duller than Grade A.

Unlike Grades A and B, Grade C silk is made from the inner layer of the cocoon. It is usually yellow, often with oily brown dots. Rather rough and without any sheen, it feels and looks more like cotton rather than silk.

Each grade has three subgrades (AAA, AA and A, BBB, BB and B, CCC, CC and C). AAA is of supreme quality. For example, in China, the homeland of Mulberry silk, AAA silk comprises only 3-5% of the overall production. Grade-AA is also quite good, but it is spun from cocoons’ waste. Grade-A sliver has shorter staple length than AAA and AA, and produced from silk waste. Hence, the cheaper cost. 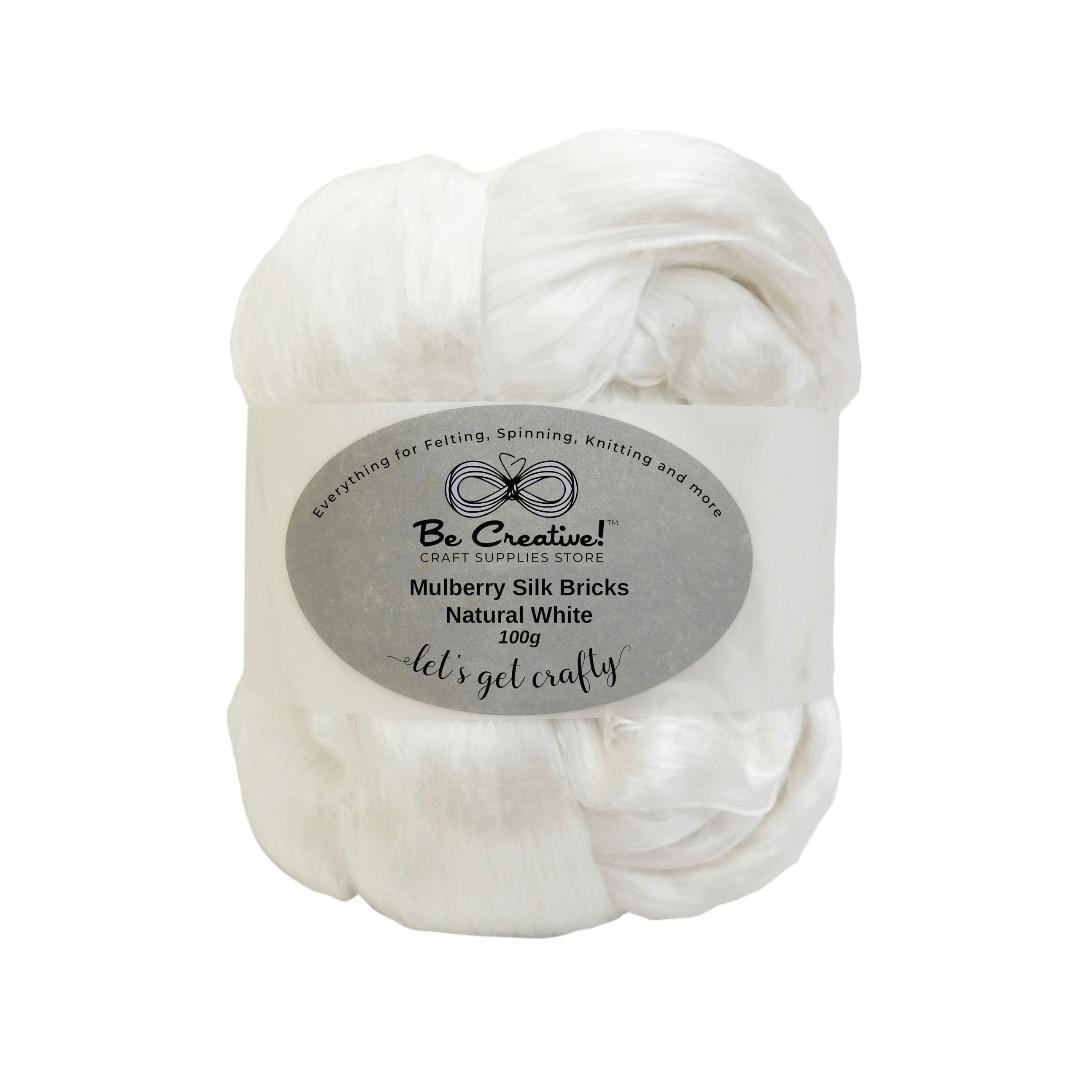 You know already that silk is made from the cocoons built around the larvae of certain moth species. And probably the word “Mulberry” is the first one that jumps into your mind when speaking about silk production. Yeah, the cocoons of Mulberry silkworms (Bombyx mori) serve as the raw material for the lion’s share of all commercially manufactured silks. After millenniums of artificial selection, the caterpillars cannot survive in the wild, and this is an example of when cultivated material is prized more than the wild counterpart, even of the highest quality. The cocoons are boiled in water and then the threads get unraveled to be subsequently dyed, if necessary. The natural colour is pearly white, but with the help of acid dyes, multi-purpose dyes or natural dyes the material can obtain any hues and shades one can imagine. Although the fibres are extremely thin, 10 to 14 microns, it will take a lot of effort to tear them apart.

There are a variety of silks produced from the cocoons of wild silkmoths.

Tussah silk (also known as tussah, tushar or tassar, with some other less common spelling options) is the name for a group of wild silks coming from India, Sri Lanka, Japan, and China. 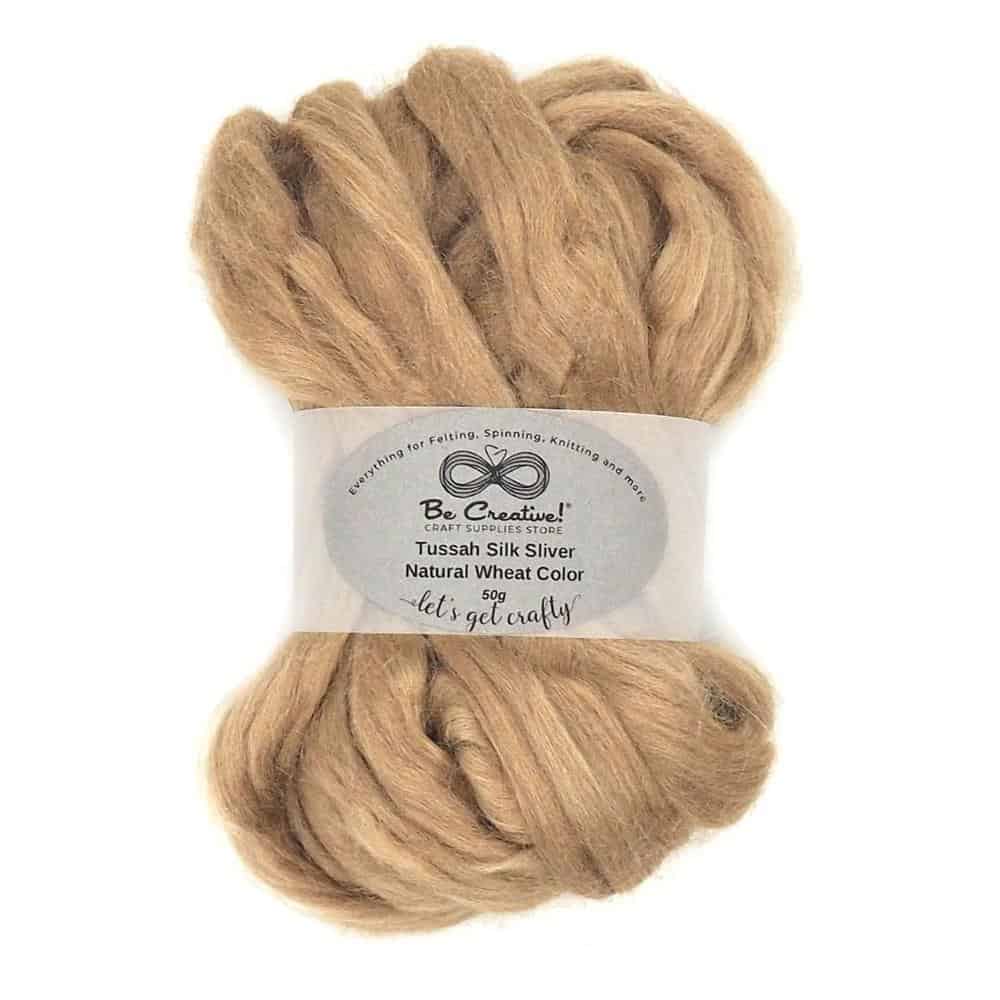 Tussah fibres are much thicker than Mulberry ones, varying from 26 to 36 microns. In addition, they are more workable, so if you are about to try your hand at spinning, this is the preferred option.

If you’ve ever seen an Indian woman clad in a saree, you have a general idea of what Tussah silk looks like. It is treasured for its beautiful sheen and deep golden hues.

Some producers bleach Tussah silk. You can purchase such fibres and then dye them to get any shade you like. 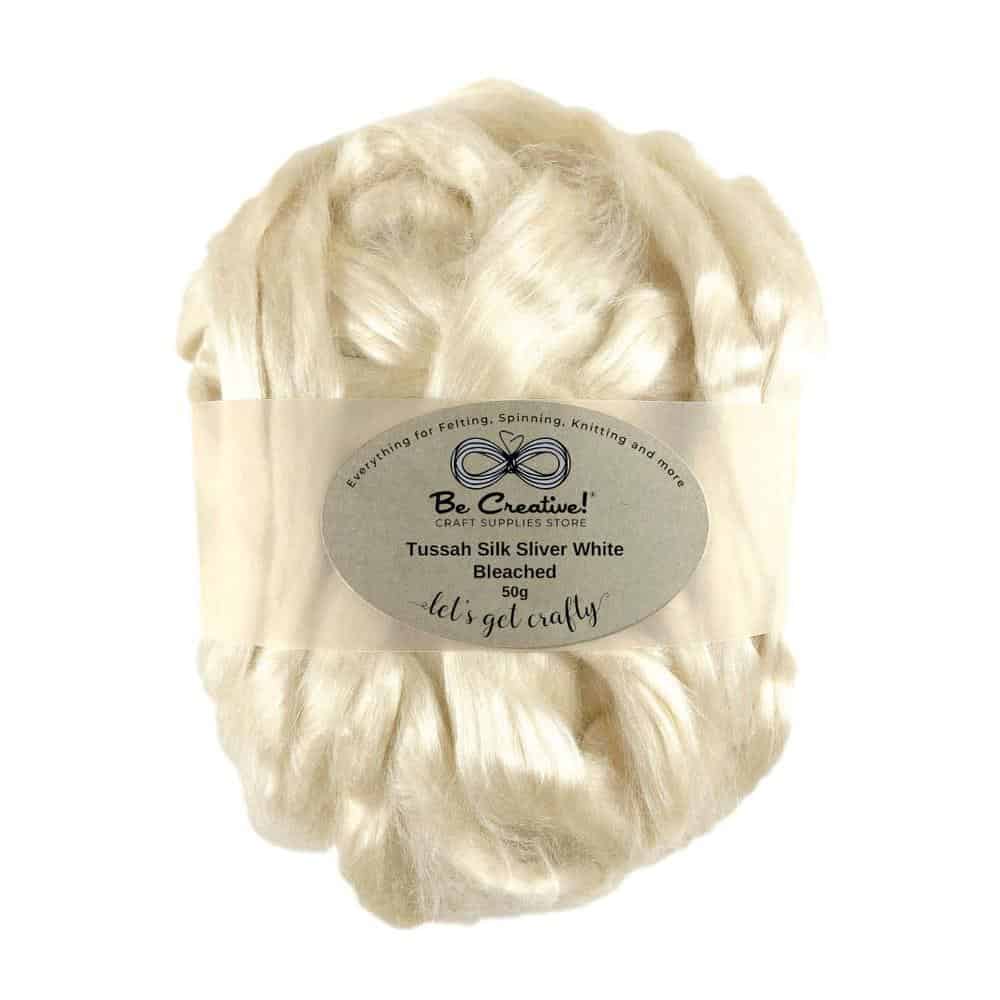 Probably the most famous kind of Tussah silk is Muga or Assam silk. This precious gift of nature is renowned for its lovely golden sheen. The fibres are made from the cocoons of Assam silkmoth. The insect is endemic to Assam, a state in India, and 99% of this luxurious material is produced there. So Muga silk is a purely wild silk known as one of the most exclusive materials of India. Can you believe it? Most fabrics fade and grow dull with the course of time, but Muga silk becomes brighter and shinier every time you wash it! That’s why it was often used for garments that were passed down for many generations of Indian rulers. Only the highest-ranking, noble people could wear such items. 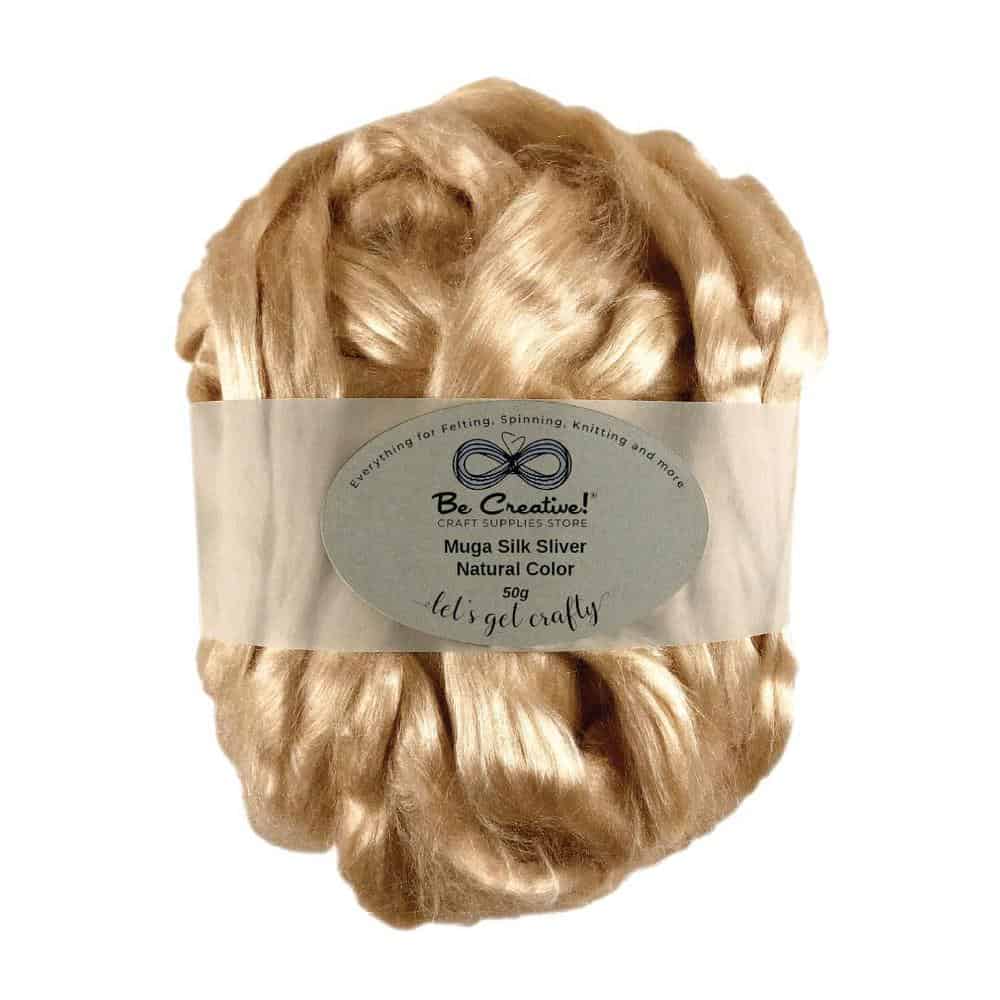 The fibres I sell are made from cocoons gathered in Indian forests with strict observance of the relevant Government laws and processed with normal boiled water only. No chemicals were used when growing them either.

I’ve mentioned above that Muga and Tussah silks are of golden colour. But the actual hues might vary from silvery to brownish (like milk chocolate). It depends on the caterpillars’ diet (the trees they feed on), weather conditions and many other factors. One can’t standardize wild creatures!

Peduncle silk is a by-product of Tussah silk. The peduncle is the dark stem that the caterpillar makes before spinning the cocoon. Rather dark, sometimes nearly black, this silk looks and feels much like wool. 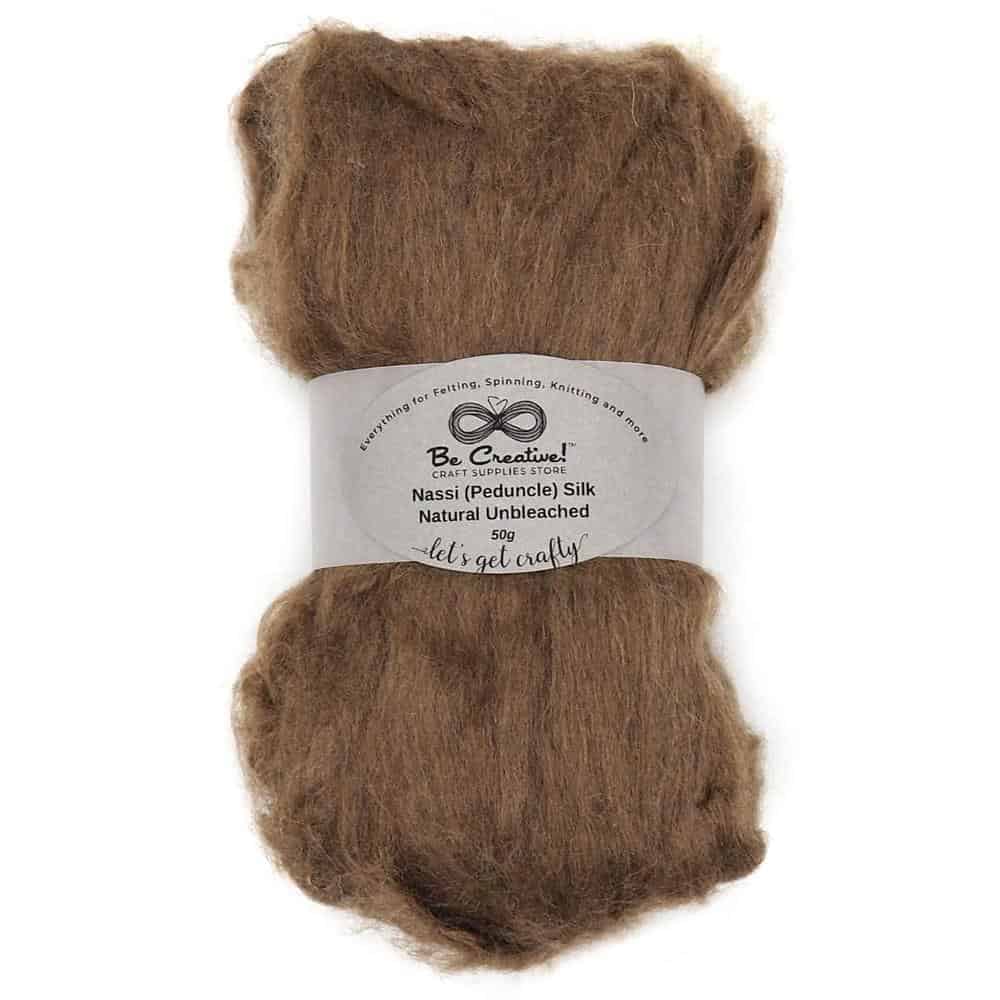 Good news for vegans! The cocoons of Muga and other Tussah varieties are gathered and boiled after the moths have left their “homes” so no creatures are killed in the process. Silk produced by this method is called Ahimsa, from an Indian word meaning “peace” or “non-violence”. 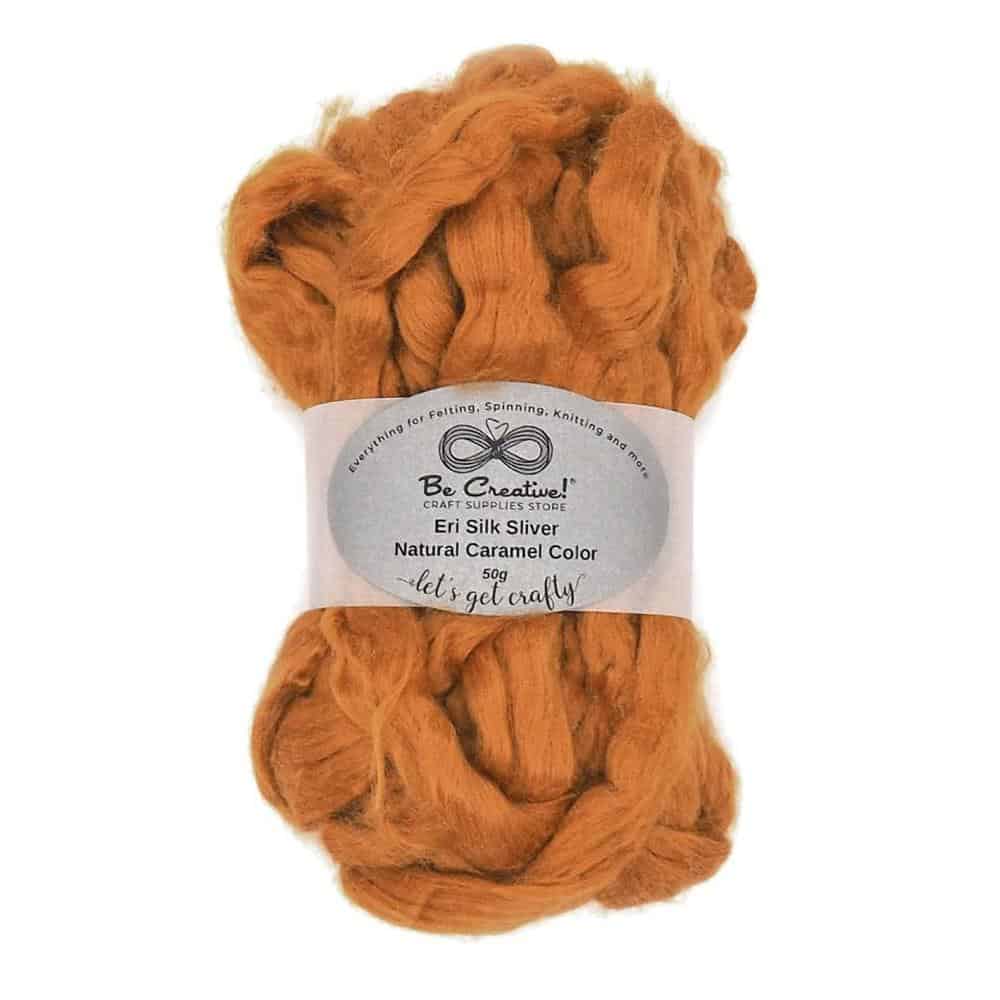 Like Muga, Eri silk also comes from Assam. And unlike Muga, it is produced from the cocoons of the Eri moth (Samia ricini), the only domesticated one other than the Mulberry silkmoth. The word Eri comes from an Assamese word for castor, the caterpillars’ favorite meal. However, they also eat some other plants.

Eri silk comes in two colors - one is golden/brick red and the other creamy white. Both varieties are absolutely natural! The colour depends on the moths’ breed. The difference is due to the kind of leaves the moths prefer. The caterpillars of the red moth, apart from castor leaves (the staple food of white Eri moths), also thrive well on the leaves of kesseru (Heteropanax fragrans) and tapioca (Manihot utilissima Pohl.). These food plants grow wildly in the north eastern regions of India, elsewhere they are cultivated for production of oilseed and tubers.

The fibres resemble fluffy or cotton wool. They are only 14-16 microns thick. However, they are outstandingly strong, durable and elastic. Eri silk is a bit coarser than Mulberry silk. Its ability to blend with wool makes it a great option for felting and spinning.

If you are a non-violence advocate, you’ll be glad to know that Eri is also an “Ahimsa” silk - although kept in captivity, the larvae are allowed to develop into moths and fly away, and only then their cocoons are gathered and processed.

Silk fibres come in several forms, most popular among feltmakers being laps, hankies and sliver.

When you get a glimpse of dyed silk laps, you might take it for a thick shawl or a wrap. It resembles a “blanket” comprising of a few layers of silk fibres. When felting, you can peel off the layers and stretch them until they are cobweb-thin. They serve to reinforce the garments and to produce a variety of designs like tree bark, see waves, etc. The procedure has something in common with nuno felting. Laps save you hours of work - you needn’t lay the silk out, you just cover the wool with a “blanket”. 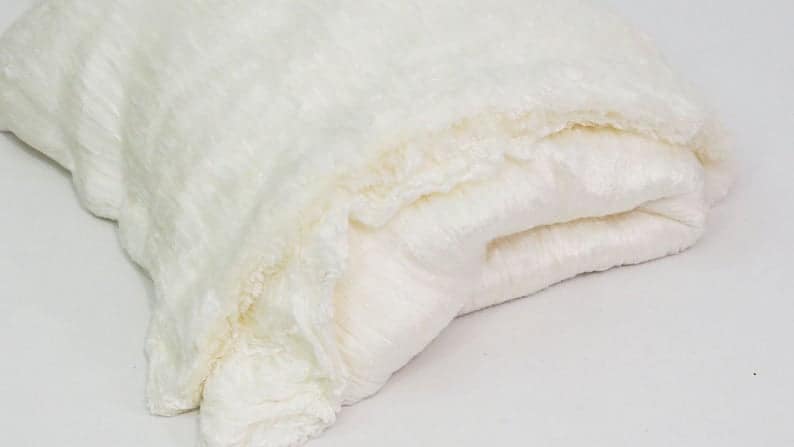 Silk hankies/cups are made by spreading a cocoon on a special frame. They may be supplied dyed or undyed. Like laps, they save your time - you may lay them in a certain way to form a design, or just cover the whole surface of the wool. Hankies or cups can be spun into a thread to be used for knitting, crocheting or even weaving. 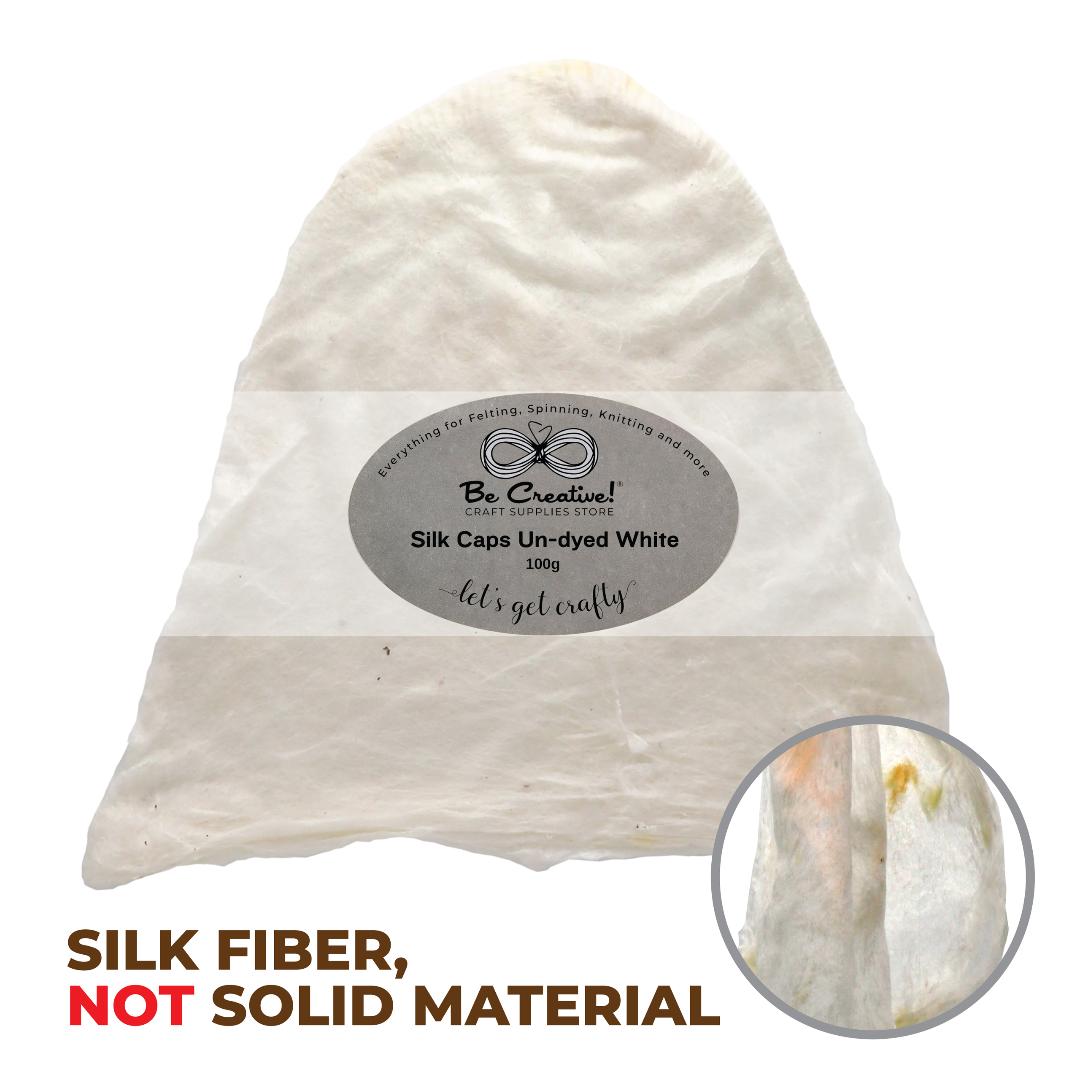 Sliver is just a bundle of fibres ready for spinning or felting. It’ll take you some time to cover a large area with sliver, but it is really handy for laying small patterns. 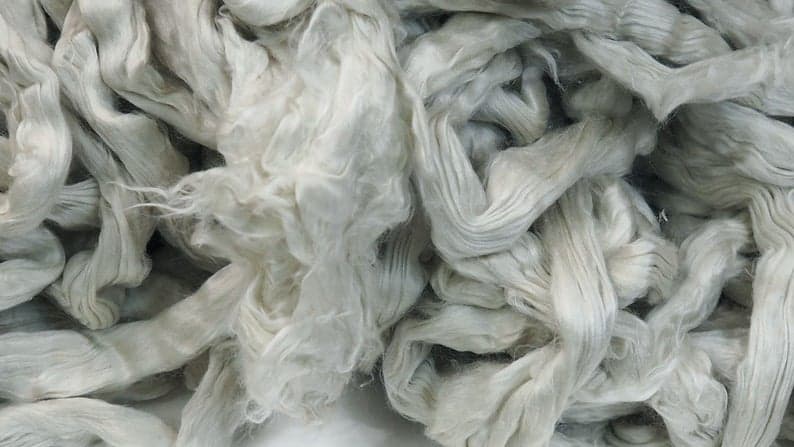 You may lay silk fibres in a certain pattern or just at random, forming lovely silky “clouds”.

When purchasing silk fibres, pay attention to the staple length. As a rule, the smaller the value, the lower the price. Before purchasing fibres with low staple value, make sure they’ll be ok for your project.

A Million of Uses

Apart from felting and nuno felting, silk fibres are extremely handy for spinning, knitting, crocheting and paper making. Indeed, the smooth and glossy fibres are a boon for any handcraft that has to do with textiles and yarns. And if you're a doll maker ... Every time they say that your dolls have silky hair, you’ll know that’s not just a compliment but the actual truth!

Choose the best silk fibers to suit your projects in my store! Have fun and be creative!